Packed in a Trunk

Some time back in the early 60's, my mother was having one of those bored, restless days, visiting the in-laws in Wheeling, West Virginia. So she proposed to my Aunt Betty that they go up to the attic of Grandma’s old three-story house and see what treasures they could dig up. They found a couple of old trunks that had been sequestered there for years. They belonged to Uncle Eddie’s long-forgotten maiden aunt.  No one in the family ever talked about poor Aunt Edith. She had been shut away in a mental institution for years and back in those days, that was just something that nice families didn’t talk about. But when my mother opened the trunks, she found dozens of Edith's light-drenched canvasses tucked in with her moldering clothes. This wasn’t the work of an amateur painter or a mentally unstable naïf.   These were sophisticated pieces done by a gifted artist, who was clearly trained and influenced by the art movements of her day.  My mother, having an eye for beautiful things, asked Aunt Betty if she could have some of these paintings. Aunt Betty, an outdoorsy person (her passions were bird watching and golf), was glad to have my mother  take some of Edith’s paintings off her hands. Apparently she had already unloaded a bunch at a garage sale and where those paintings are, nobody knows.

I grew up surrounded by Edith’s work. Her palette, her brush strokes, the quality of light in her landscapes became part of my own visual vocabulary.  I painted with the brushes that my mom had retrieved from Edith's trunks.  I ended up wrecking every last one of them but I don't think Edith would have minded.  If you look at all the studies she did of children, you can see that she had a soft spot for kids.  She even let some child draw a silly duck on a page in one of her sketch books.  She must have been a gentle, playful, curious soul.

When I was 20, I moved to New York City -- the same age as Edith when she left her home in Wheeling to study at the Art Student League.   I took classes at the League as well and kept notebooks filled with subway riders, bag ladies, sunbathers in Central Park, scenes from Coney Island and the Lower Eastside.  Around that time, my aunt and uncle let me root through their closets and drawers for any more scraps of Edith that I could find.  It was then that I found  Edith’s sketchbooks and I was astonished to see that sixty years earlier, Edith had been wandering those same streets sketching the people she saw: street vendors, immigrant women with their children, uptown ladies arranged on park benches. It was clear that we were visual soul mates. 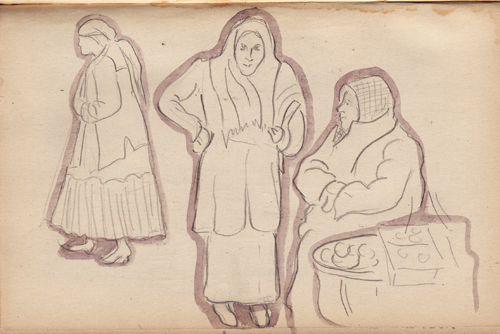 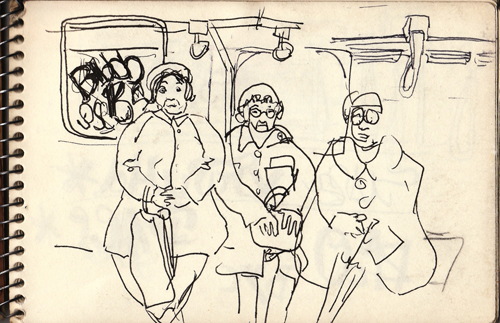 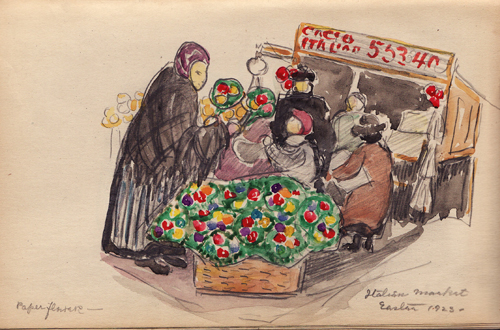 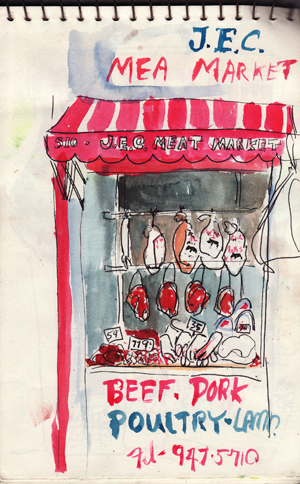 I set out to find out as much about Edith as I could.  I got whatever records I could from the two asylums where Edith was sequestered for the last half of her life.  All that I found was a one-word prognosis in blurry type:  “depression.” I found a letter from the Wilkinson family lawyer who was in charge of her estate and doled out a monthly allowance to Edith.  In the letter he explained why she hadn't been receiving as much income as she had before.  He also advised Edith against living with her companion Fannie.  So Edith was gay which made her all the more vulnerable to the whims of a crooked lawyer.  A letter from a circuit court in West Virginia revealed on typing paper as thin as onion skin that this fellow had been absconding Edith’s funds and was headed for prison after years of bilking a long list of clients (including a pair of blind sisters).   As I pieced together the bits of Edith’s story, it was thrilling to unearth the clues. It also made me incredibly sad that such a talent had been so cruelly shut down.

I wanted to get Edith's work back out into the world.  I went to the museums and galleries in Provincetown armed with slides of her work, hoping to get her a show. No one was interested. She was far too obscure.

So I took a long break from Edith. I had my own career as a writer to worry about. I packed up her work and moved to L.A.   Her paintings now hang on the walls of the house that I share with my spouse, Tess, and our son and are a witness to my own happy life.  I’m now in my late 50’s, the age when Edith was put away.   I’m still productive and I’m still loved. I have the life that Edith should have had.

So, forty years later, I’m taking up the Edith cause once again. But this time I have the marvelous tool of the web to spread her work around. Feel free to stroll through this site and then please pass it on.

Here’s to pulling all the lost and gifted souls of this world out of attics and closets and forgotten rooms.

Here's to being seen.

(Special thanks to Dick and Kathy Vossler and John and Marsha Anderson for sharing their Edith Wilkinson prints and paintings on this site.)