Michelle Boyaner is an award winning Filmmaker/Writer/Director whose films have included the Documentary short films, Hi, You've Reached Dave's Apartment, and Tina Paulina: Living on Hope Street; the Documentary feature, A Finished Life: The Goodbye and No Regrets Tour and the narrative shorts, You’re Still Young and The Bedwetter. Prior to her film work, Michelle wrote Oh, for God's Sake Whisper It, a book of personal essays chronicling her beloved Grandmother's battle with Alzheimer's. For more information about Greenie Films, check out the website: www.greeniefilms.com

Jane Anderson is an Emmy award-winning writer and director for theater, film and television. Works for television include: Olive Kitteridge, Normal, The Baby Dance, The Positively True Adventures of the Alleged Texas Cheerleader Murdering Mom, When Billie Beat Bobby and the first segment of HBO’s If These Walls Could Talk II. Screenwriting credits: How to Make An American Quilt, It Could Happen to You and The Prizewinner of Defiance, Ohio. Works for theater include: The Mother of the Maid, The Escort, The Quality of Life, Looking for Normal, The Baby Dance, Defying Gravity, Lynette at 3AM and The Last Time We Saw Her.

Award-winning Filmmaker/Cinematographer/Editor Barbara Green has completed three documentary short films: O'Day At The Races, a documentary on the life of jazz legend Anita O'Day; Hi, You've Reached Dave's Apartment, a glimpse into the day-to-day life of her 41-year-old schizophrenic brother, which premiered at The SXSW Film Festival in 2001; and Tina Paulina: Living on Hope Street, an inspirational look at a homeless lesbian living on the streets of downtown Los Angeles.  Barbara’s recent work includes the feature-length documentary, A Finished Life: The Goodbye & No Regrets Tour and the narrative short film, The Bedwetter. To see some of Barbara’s still photography projects, check out her website: www.barbaragreenphotography.com

Tess Ayers is the author of the best seller The Essential Guide to Gay and Lesbian Weddings. She has been a producer for talk shows (The Dennis Miller Show, Into the Night with Rick Dees, The Late Show) and writer for game shows (Trivial Pursuit, Hitman, Bogus). She currently serves on the boards of The Los Angeles LGBT Center and of Food on Foot, a Hollywood-based food-to-work program. 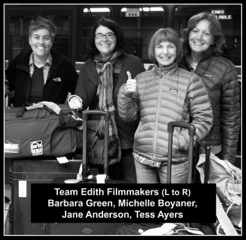